America was in the middle of an aviation craze in 1927 when Charles Lindbergh crossed the Atlantic Ocean. A young woman from Nebraska named Myrtle Madeline Brown became obsessed with the notion of flying. She was a graduate of the University of Omaha and was attending a music school in Maryland when she quit to pursue the wild blue yonder.

Fortunately for Miss. Brown, noted aeroplane designer Giuseppe Bellanca was living in Omaha where he was a partner in the Roos-Bellanca Aircraft Company and her father was his landlord.  Bellanca was a close friend and business associate of Clarence Chamberlin, one of the most well-known pilots of the day. Bellanca arranged for Myrtle and her sister Dorothy to fly with Chamberlin. That was all it took! Myrtle was hooked on flying and determined to fly. Her sister became involved with Giuseppe and soon they were married. In 1927 Giuseppe M. Bellanca was lured to Delaware by Henry B. duPont and formed the Bellanca Aircraft Corporation of America with support of the duPont family.

Brown moved to Delaware with her sister and Bellanca. It was not long before she started pilot training. On July 11, 1929 her name was on the front page of all of the Wilmington newspapers because the previous day she earned her wings. The federal government awarded Brown pilot's license No. 7701 making her the first woman in Delaware to do so. On June 28, 1929 she was back on the front page again when she told the Evening Journal that it was her intention to earn a commercial license and cross the ocean. It was her intention to fly from New York to Rome as a tribute to Bellanca's native Italy. 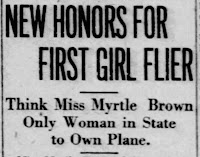 On October 28, 1929 Brown was on the front page again when the Every Evening reported Brown purchased her own aeroplane, a three-place Kreider-Reisner Challenger powered by an OX-5 Curtiss motor. They reported that she was the first woman in Delaware to own an aeroplane.

On November 2, 1929 an organization of female pilots known as The Ninety-Nines was formed with Myrtle Brown was a charter member. They elected Amelia Earhart as their first president. The Ninety-Nines still exist today, their mission statement is as follows: The Ninety-Nines is the International Organization of Women Pilots that promotes advancement of aviation through education, scholarships and mutual support while honoring our unique history and sharing our passion for flight.

Brown had lofty aspirations, she wanted to cross the Atlantic and set endurance records and even before she had her pilot's license she petitioned and was turned down for permission to fly under the Brooklyn Bridge. On May 30, 1930, at the age of 27 and less than a year after obtaining her license, she opened her own flying field at Painter's Cross Roads, near Concordville, Pa. Its name was "The Myrtle Brown Flying Field." She took up twenty six passengers in her Kreider-Reisner Challenger on the official opening day at the field. Her sister Dorothy and brother-in-law Giuseppe Bellanca were among the first passengers. A number of area male pilots paid tribute to Miss Brown that day by either circling over the field or landing to greet her.

On June 1, 1934, Brown was in her home state of Nebraska helping to launch a new airport when she was stricken with appendicitis. She died that night at Methodist Hospital in Omaha from the resulting blood poisoning known as peritonitis. The next day she was on the front page of newspapers one last time, from coast to coast, the newspapers carried the story of her. Myrtle Madeline Brown had accomplished a lot in her 34 years. Had she not perished, who knows how her story would have unfolded.

Myrtle Madeline Brown was not native to Delaware, did not live in Delaware very long, and even when she she lived in Delaware, her feet were never on the ground very long, but she will forever hold the title of Delaware's very first aviatrix. She was a remarkable woman.

J.T. and L.E. Eliason, Inc. was founded in the 1870's and had grown into one of New Castle's most recognizable companies. Eliason's company provided building materials, coal, fuel oil, hardware, and household goods to New Castle residents. The Eliason brothers purchased their first motorized delivery truck in 1918, not long before this photo was taken at West Fifth and South Streets. Once the truck was purchased, the company's horse-drawn delivery wagons were slowly phased out of use. The tall building in the background was used as a warehouse for the company.


The Eliason Lumber Company joined the rest of New Castle in celebrating arrival of the ferry in 1925. The company touted it's new delivery truck, which had replaced two horse-drawn wagons that were replaced 10 years prior. Here, both the old and modern vehicles on South Street headed toward the waterfront.

James and Lewis Eliason opened a warehouse at 5th and South Streets in the former Red Men's Hall, where the Lenape Fire Company, New Castle Cotton Glove factory, and the New Castle News had previously been located. Eventually, they moved out, and building was torn down.

The company sold coal, harnesses, wagons, plows, and other farming items. While the business continued to sell agricultural products like fertilizer, it also began to increase amount of hardware and other products needed by urban homeowners. By the time photo was taken, the small business started in the 1870's had grown into one of New Castle's most recognizable companies. In 1966, the Eliasons merged with Brosius & Smedley Company.

For the final post of the decade we’re stepping back 130 years to check out the coroner’s year-end report for 1889. Coroner Neven C. Gamble and the Deputy Coroner was George T. Barnhill released their report explaining that their office handled about 145 cases, the various causes, and the names of the victims.

This does not mean only 145 people died in New Castle County that year. It means they were called upon to determine the cause of death and if criminal circumstances or negligence played a role in the deaths of 145 people. To do so they formed a jury that looked at the facts related to the death and assigned an official cause and determined if was the result of criminal or negligent actions.  Of those 145 deaths, 68 were considered violent deaths with the greatest number of people, 30 in all, met their fate from railroad accidents.

Railroad switching yards were dangerous places and Wilmington’s West Yard was the largest and busiest in Delaware. These switching yards were not fenced off, locals would often cut through when walking, kids would go to watch trains, and people would board freight trains to travel. Additionally, people used the tracks as walking paths and being on the right of way was not considered trespassing.

The stories of the dead are often horrific and newspapers of the day went into very graphic detail, providing a glimpse of both the danger and the vastly different way the departed were handled at the time. A sample of their stories include the following.

Ernst Gabriel, age 15, was on his way to work at Edge Moor on January 10, 1889. He was hit by a train at Landlith when he ran across the tracks attempting to catch the workmen’s train and was hit by a passing freight train. The coroner’s jury censured the railroad and engineer because they felt the freight train was running too fast. No charges were made but the censure open the path for civil action against the railroad be Gabriel’s family.

Charles E. Spencer, 30-years old, were working as the conductor of a northbound freight train at New Castle on February 1 when he fell under the wheels and was cut in half. His remains were carefully gathered up and conveyed to Wilmington by train and then transferred to his home at 707 Spruce Street. At his memorial service a railroad friend recalled Spencer once commented about the dangers of railroading, “I want a through ticket when I go, and I think I have one.” Spencer left behind a wife and child.

Roger Bayne, track worker was found dead at West Yard on March 9.  He was apparently struck by a train but no train crew never noticed striking anyone. Bayne lived at 1111 Chestnut Street and his body was brought to his house.

Michael Madden, age 25, was killed at West Yard on March 12 as he attempted to hop onboard a moving freight, slipped, fell under the wheels, and was run over by 30 cars.

Two men were struck and killed by a train at West Yard while walking the tracks on September 30. One had papers in his pocket identifying him as Patrick Ryan and the second man was unidentified. Both though to be in their forties and recent immigrants from Ireland. Many people stopped by the morgue to have a look, but neither body was ever claimed.

In that era, so many people were killed on the railroad that the Philadelphia, Wilmington, & Baltimore Railroad had both a hospital and morgue at its station in Wilmington. If you read the article you will also notice that amongst the 145 deaths investigated in New Castle County, there were 4 people killed by gunshot wounds, 2 stabbed, 13 drowned, 5 suicides, and 12 other types of accidents.

Anyone working for the railroad had to have known more than one coworker who was killed and could very well have picked up the remains and transported them to the station onboard the train. The notion of delivering a person's remains to their late home is just not anything that has happened in many decades. The situation at the house on Charles E. Spencer must have been beyond anything imaginable when his remains were returned to his late residence at 707 Spruce Street.