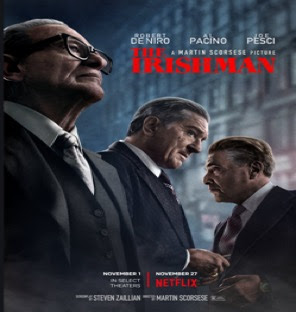 Many readers of “The Almost Forgotten History of Wilmington” have or will watch the much-hyped new movie  The Irishman starring Robert De Niro, based on the biography of Frank Sheeran, a Teamsters Union leader, who allegedly had a role in killing Jimmy Hoffa.

Unusual for Hollywood movies, however, the state of Delaware makes an appearance.

An up and coming Sheeran accepts money from Philly gangster Whispers DiTullio to go to Delaware to “put out of commission” an upstart company called Cadillac Linen that was successfully drawing business from a similar company owned by Whiskers.

In both the movie and the book, Sheeran scouts out the target in Delaware (presumably Wilmington) and is ready to pounce.  Then at the last minute he is spotted by another gangster who orders him to stop the operation because it turns out Cadillac Linen is unbeknownst to Sheeran linked to the mob.  Sheeran’s life is saved!

Interesting story.  Is it true?

There is no doubt that Sheeran had strong ties to Delaware and his local career was well documented.  John Riley, author of the new book, Delaware Eye Witness: Behind the Scenes in the First State, describes this scene as a young salesman:

“Nearly at the point of desperation during my first year for some business, I received a call from the Teamsters Union office in South Wilmington.  The rather intimidating looking gentleman in charge asked me the cost of the recently introduced Xerox 4000 copier.  Before I could reach into my bag for a price sheet, he pulled a gun out of the desk, slammed it down in front of us and said “First, we have to negotiate.”  Looking back, I believe that man was Frank Sheeran of I Heard You Paint Houses fame) the title of the book by Delaware attorney Charles Brandt, which connects Sheeran to the disappearance of Teamster boss Jimmy Hoffa).  Fortunately, he began to launch and then put the gun away.  It would be one of my first orders.”

On the other hand, there is no evidence that there was ever a company in Delaware called Cadillac Linen.  A keyword search of newspapers.com shows one mention ever in a Delaware newspaper of a company of that name.  In 1981, Cadillac Linen of Philadelphia purchased Standard Linen Service on Vandever Avenue.

No. 97 Vandever Avenue would match the industrial scenery of the plant Sheeran scopes in the movie. Was Sheeran confusing Standard Linen with Cadillac Linen?

Finally, I called a friend, an old-time WIlmingtonian who upon returning from World War Two embarked upon a long career in sales.  In the process, he developed encyclopedic knowledge of the Wilmington business scene in the post-war era.  He had never heard of any company in Wilmington called Cadillac Linen. “If there was one, I would have heard of it.”

So did the mention of Delaware actually take place?  It seems that Sheeran was known for telling quite a few tall tales. Sounds like this might be another one.

Nathan Field is the founder of the Wilmington History Society