The story starts with a December 24, 1915 ad for toy electric trains in the Evening Journal. 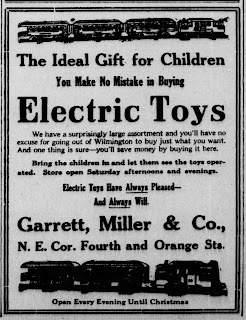 The toy trains, probably some of the first sold in Wilmington, were being offered for sale by Garrett, Miller, & Company. If you’ve lived in Wilmington long enough you know that name. The way research works is often one little bit of information sparks interest in something else which is the case with Garrett, Miller, & Company, a company certainly worth writing about.

Garrett, Miller, & Company dates back to February 14, 1889, when George W. Stone and J.R. Hudson incorporated the Stone and Hudson Supply and Machinery Company. This company was located at Water Street in Wilmington and its primary business was plumbing and ship chandlery. Two year later it was reorganized as Delaware Electric & Supply Company and moved to 211 Shipley Street where it operated for many years.

On February 26, 1895, Wilmington native Frank S. Garrett and his friend Henry K. Miller left positions with the William Sellers Company of Philadelphia and purchased the electrical department of Delaware Electric & Supply to form their own company. This company went on to be one that Wilmingtonians came to know and trust for a century-- Garrett, Miller, & Company.

Garrett was the grandson of Thomas Garrett, Underground Railroad conductor and friend of Harriet Tubman. The two of them led hundreds of slaves to freedom and Tubman-Garrett Riverfront Park in Wilmington honors the pair.

Delaware Electric & Supply continued on Shipley street and Garrett, Miller, & Company set up shop at 4th and Orange Streets. It’s important to note that these were the early days of electricity and the future held many electrical devices not yet invented. Initially the firm sold electrical supplies for construction but soon ventured into other electrical devices.

In 1916 they were offering upright vacuum cleaners and lamps. in the 1920s they jumped into selling the cutting-edge technology of AM radio. They were selling the Atwater Kent brand which was manufactured in what was reported to be the world’s largest radio factory in Philadelphia. Today the Philadelphia History Museum at the Atwater Kent carries that name.

By the 1920s they were selling a wide array of electrical items including added smaller items such as toasters, curling irons, and heating pads along with the larger appliances including the White Lily brand washing machines and Frigidaire brand refrigerators in the 1920s as well. In 1925 their ads boasted, "Now only $190 now only for the unit that makes your ice box a Frigidaire." In the 1930s the firm picked up the Philco brand of radios and soon became a regional distributor.

Electricity had brought a technological revolution and Garrett, Miller, & Company was riding high. Through the years they became Wilmington

premier appliance retailer. Henry K. Miller died in 1925 at age 64 and the business continued with Garrett in charge until his retirement in 1948. Donald K. Farquhar became vice president and general manager and eventually purchased the company. Garrett died in 1950 at age 81.

In the 1960s the company moved to Germay Drive and continued to dominate the appliance market in Wilmington. By the 1990s the landscape for retail appliance sales had changed and Garrett Miller struggled on until 1997 when the company closed its doors forever. Farquhar remained active with the company until it closed.

The Delaware Electric & Supply Company remained on Shipley Street and in 1930 changed its name to Desco Corporation. With the electrical business sold, their focus was selling industrial piping and fittings. The company left Wilmington in the 1960s and moved to Basin Road and became McArdle-Decso Corporation. They were eventually taken over by Deacon Industrial Supply and the Basin Road facility was closed.