Frank the Butcher KOs the Wizard of Robinson Street


Today the West Junction is no longer a place name in New Castle County, but it is still known as WJ to railroad workers at CSX where their tracks cross Centerville Road. This crossing is notorious to motorists in the Prices Corner area because of how often 10,000-foot long freight trains block the road for long periods of time. In 1890 West Junction was a sleepy little outpost on Baltimore & Ohio Railroad (B&O) where a telegraph operator received and sent information on train movements and passed up train orders to the crews of passing trains.

The operator worked long shifts alone in a control tower, often with idle time on his hands between trains. More than one lonely telegraph operator probably wished they had company. One of those men was Abraham Ringland. He was a married man with four children who also operated a small grocery store at the corner of Poplar and Robinson Streets in Wilmington. A pretty young city woman named Josephine Lee became inordinately fond of Ringland and often visited him at the lonely outpost to help him pass the time.

The problem with this situation was in addition to Ringland being a married man, Josephine was rd Street with and their four young children. Mr. Lee was a well-known butcher who swung his cleaver in stall number 53 of the 2nd Street Market House.
married to Frank C. Lee. The Lee’s lived at 630 West 3

The market house was built right in the middle of 2nd Street between Market and King. Similar market houses survive in Baltimore and Philadelphia. The street split into two narrow lanes on either side of the market which created a difficult time for traffic. It was removed in 1925 due to the congestion it caused with growing automobile traffic in the city.

The story, as reported in the Evening Journal, is that Josephine would take a horse Ringland kept in Wilmington and drive it out to West Junction to spend her spare time with the “Wizard of Robinson Street”. This went on for two years and Mr. Lee at one point asked for a divorce but was dissuaded. As the affair went on Mr. Lee “bided his time and went into training for a fistic encounter.”

On Friday, November 11, 1892 Mr. Lee became aware of his wife heading off one of her clandestine West Junction excursions. He went to her brother, only identified as Mr. Metcalf, and explained the situation. Metcalf was up for the task of showing Ringland a thing or two. With no horses the two set out on foot for West Junction arriving around 3PM, just in time to find Ringland helping Mrs. Lee into the carriage. Her visit to the control tower was finished and she was ready to return to Wilmington.

Mr. Lee approached Ringland and said, “you ---- ---- ----- ----- I have you this time!” Lee struck Ringland with a hard right and drew blood. Lee worked Ringland over. Ringland was knocked senseless. Ringland swore that during the exchange with Mr. Lee, Metcalf struck him with a blackjack, but Lee insisted it was only his skill with his fists that did the work.

Mr. Lee and Metcalf took the Mrs. Lee and returned to the city in Ringland’s carriage. Ringland was left in the middle of the road bruised and bleeding. Reportedly he was knocked unconscious and it was 20 minutes before he was able to return to his duties in the tower. When the railroad pay car arrived later it was reported the paymaster said Ringland looked like he was struck by the Royal Blue Express.

A few days later Mr. Lee was interviewed by the Evening Journal. He told the reporter that since it was all over town, he would explain some of the details. He said he caught them the previous summer coming from Brandywine Springs together and Ringland ran away. Ringland told the reporter that in spite of the beating Mrs. Ringland was back out at West Junction the next night.

Word of Ringland’s on-duty distractions quickly reached the B&O Railroad's Philadelphia Division, Superintendent J. Van Smith and he was discharged. On November 28, 1892 Ringland traveled to Philadelphia to try to get his job back. The effort failed but Ringland soon found work as a trolley conductor in Wilmington. He held that job until 1912 when he died of a stroke at the age of 45. He left behind his wife and four children; he was remembered as a very popular conductor on Wilmington’s trolleys.

In November of 1893 Josephine Lee left for good. In March of 1895 Frank C. Lee was granted a divorce and was awarded custody of their children. Six months later he married Viola Vincent with whom he had four more children. He died of apoplexy in 1908 at age 51 leaving behind Viola and eight children ages 4-21.

The next time you are stuck at the Centerville Road railroad crossing you can look around and imagine what you would have seen if you were passing by at about 3 o’clock in the afternoon on Friday, November 11, 1892.

On November 25, 1957 the Evening Journal published a short story about Scott V. Norris being awarded an honorary scroll for 50 years of service at the Haveg Industries plant in Marshallton. He started at the plant as a machinist when it was built by the Delaware Hard Fibre company in 1907. Delaware Hard Firbe purchased the site of the former Marshallton Iron Works to relocate its plant from 11th and Union Streets in Wilmington. In 1930 it was merged into the Continental-Diamond Fibre Company and in 1936 the plant was acquired by Haveg Industries and in 1964 by Hercules. In 1980 Hercules sold the plant to the Ametek, Inc. Ametek closed the plant in 2003 after it was wrecked by record flooding of the Red Clay Creek due to Tropical Storm Henri.

In 1930 Norris was promoted to superintendent, in 1952 to plant manager, and in early 1957 he was promoted to assistant to the president the position he held until retirement in 1962. He was well-known in the Marshallton area. Norris was a charter member of the Mill Creek Fire Company, served as its president for 2 years, and served as its chief for 20 years from 1938-1958. In January of 1940 Norris established a weekly “fire school” at Mill Creek. The first in the area.

Norris left the plant to serve in World War I in 1917-1918. At the onset of World War II Norris was called upon to serve as Civil Defense commander for the Mill Creek area Civil Defense Council. On December 31, 1941 he was registering local residents at Foard’s Store and Mill Creek Fire Company. In early 1942 he had an air raid siren installed at Weinstock’s Store in the Cedars. The plant whistle at the Haveg Industries plant served that purpose in Marshallton. Norris also organized community first aid and air raid precaution classes. The council also ran War Bond drives.
Norris remained active in civil defense as the cold war unfolded. In 1950 he was appointed Chief for Plant Protection for the state’s civil defense organization. On September 9, 1950 he briefed the state on the impact of an Atomic bomb being dropped in the middle of Wilmington. It might seem unimaginable today, but in 1950 it was a real enough worry to make the front page of the Morning News. Norris' map (right) was featured in the article.

Scott V. Norris and his wife Bessie were married in 1923 and raised four children. Bessie passed in 1970 and Scott in 1972. At the time of his death in he had 22 grandchildren and 12 great-grandchildren.

The Wilmington & Western R.R. gets a Boost from Governor Carvel

In early November 1962 the notion of the Wilmington & Western Railroad was just a dream. Even though the fledgling Historic Red Clay Valley owned locomotives and passenger cars, the B&O Railroad was unwilling to allow tourist trains to operate on its Landenberg Branch. In an effort to convince the B&O to allow tourist trains on its tracks, W&W
founder Tom Marshall along with Alto Smith, George Sargisson, and Pete Steele met with Delaware Governor Elbert "Bert" Carvel. The contingent explained the young but determined organization’s plans and how Delaware stood to benefit from the operation of the envisioned historic railroad. Tom presented, and Carvel, who as described by Tom, stood six foot six and had a husky, booming voice, liked the idea. Carvel said he would make a phone call to an old college friend at the B&O, Vice President of Research and Development Douglas C. Turnbull.

Later, W&W volunteer Tim Cronin recounted how one day Pete Steele stopped by during a work session and explained that Carvel was actually calling in a huge favor. The Pittsburgh Consolidated Coal Company was planning on building a coal slurry pipeline that would connect the coal mines of West Virginia to the eastern seaboard in Delaware. In West Virginia there was concern about taking so much water out of the state’s rivers and in Delaware there was concern over where the dirty water from the slurry would end up and how it would be cleaned. The railroads and their unions opposed this pipeline, knowing it would mean a huge loss of business. The battle pitted railroads against their biggest customers and the railroad unions against the coal miners’ unions. Amidst this tempest of controversy, the large and powerful coal company kept the process moving along. It was Turnbull who lead the B&O’s effort to fight the pipeline and it was Delaware, under the leadership of Turnbull’s old college friend Gov. Carvel, that refused to allow permits for the pipeline to be built.

Carvel’s phone call worked and Turnbull soon met with Tom and explained that the B&O was ready to allow Wilmington and Western to operate passenger trains. Now the holdup became the labor unions. Under long-standing labor agreements, every train operating on the branch did so with a five-person union crew. Governor Carvel gave Tom contact information for local union leaders and Tom made several presentations at various union meetings. It took two more years until the first train operated. Tom Marshall’s persistence and leadership really paid off.

The Wilmington & Western Railroad operated its first steam-powered passenger train through the Red Clay Valley on Memorial Day Weekend in 1966 and continues as Delaware's only full-size historic railroad. The men who met that day in 1962 have all passed on but their legacy carries on. More info on the Wilmington & Western RR can be found online at WWRR.COM.

Early 1900s Postcard View of Wilmington Shops Wilmington has been a railroad town since America became connected by steel rails. There a... 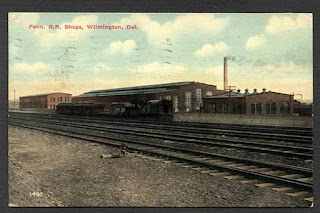