This is the story of a groundbreaking woman, wealth, tragedy, love affairs, airplanes, broken hearts, and lawsuits. The story of Katrina Pusey, an aviation pioneer in Delaware.

Katrina Elizabeth Pusey was born in 1904 as the only child of Edward R. and Clara I. Pusey. Edward was a successful and well-connected coal merchant. The Pusey’s lived at 1513 N. Franklin Street where Edward provided a good life for Katrina. She graduated from Tower Hill School in 1923 and enrolled in National Park Seminary in Washington, D.C. Often, when she returned to Wilmington she would entertain friends on her father’s yacht, Bunny II. She graduated from the seminary in 1925. In November 1925 Katrina’s father was tragically lost at sea when his yacht, Bunny II burned off the coast of South Carolina.

For many years the Pusey’s maintained a residence in Rehoboth, and continued to do so after the loss of Mr. Pusey at sea. It was at the beach, on March 26, 1928, Katrina enjoyed a moment of fame. The Evening Journal ran a story about Pusey being the first bather of the season at Rehoboth. The paper explained that Miss Pusey “disported in the water for some time before an admiring crowd.” One of the things I really enjoy about doing research is stumbling upon long-disused words such as disported. To disport means to play in a carefree way or to amuse yourself in a lighthearted fashion. Now try to imagine Katrina disporting in such a way that she drew a crowd and made the newspaper in Wilmington.

Katarina spent most of her 20’s in the newspapers. On September 29, 1928, after a whirlwind romance, Katrina married Theodore William Canning of Wilmington. Canning had been a laundry wagon driver who got into radio sales and then made a small fortune trading stocks. The marriage was a surprise for many, Canning moved in with Katrina and her mother. On October 23, 1929 the Evening Journal reported that both Mr. and Mrs. Canning signed up for flying lessons. On March 18, 1930 they obtained their licenses, making Katrina the second woman in Delaware to earn her wings and the pair the first married couple in Delaware to do so. On May 3, 1930 the Evening Journal reported the couple purchased a brand-new biplane manufactured by the Waco-Wright Company of Detroit.

All was not well, just a few months later on June 18, 1930 the Morning News reported that Mrs. Clara I. Pusey had her son-in-law arrested for embezzling $4,000. Theodore Canning had lost his estimated $250,000 fortune in the stock market crash and was depending upon the Pusey family fortune to maintain his lifestyle and apparently got too greedy. Three days later the charges were dropped at the request of Mrs. Pusey. The Canning marriage was on the rocks.

Now estranged from Theodore, Katrina moved to Baltimore and earned her Limited Commercial pilot’s license. She also took the position of secretary of the Curtiss-Wright Flying Club in Baltimore and in January 1931 took a job as a hostess with Eastern Air Transport working between Newark, N.J. and Washington, D.C. In March she left the airline and returned to Wilmington to reconcile with Theodore and the two set off on an airplane tour of the midwest. On November 19 the Evening Journal reported that the couple had just purchased a new Stinson airplane.

We don’t know much about what happened after purchasing the airplane but we do know on November 27 Theodore Canning departed on an ocean liner to Europe with a business associate, the retired Rev. Thomas Cooper.

A little over a month later, on January 8, 1932 the Salem (Ohio) News announced that a man named Theodore W. Canning of Wilmington, Delaware, then 28, had married an Ohio woman on December 9, 1931, while in Rome, Italy. The lucky bride was 19-year-old Miss Ann Sharer of Alliance, Ohio. The young Ohio bride was not only beautiful, but also an heiress to a multi-million dollar estate. Her parents had both died when she was younger and she was raised by her wealthy Uncle, Col. William Henry Morgan, and lived on his estate, Glamorgan Castle. 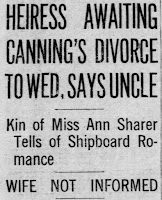 The next day the story broke in the Wilmington papers and the biggest scandal of recent memory started to unfold in Wilmington. The local papers speculated if it was the Theodore Canning everyone knew. Two days later, on January 11, Katrina had no confirmation. Through the month of January the sensational story was printed in newspapers all over the country.

Theodore and Ann Sharer had a torrid romance aboard the ship and then toured various European cities together. The story of the wedding was apparently untrue but it was confirmed Sharer would await for the Cannings to divorce and then marry Theodore.

In March 1932, Katrina not only filed for divorce but also filed a $50,000 lawsuit against Sharer claiming that Sharer, “deprived her of her husband’s society, aid and support, and willfully and wickedly gained his affections.” The suit was quietly settled out of court.

On January 3, 1934 the Cannings divorce went through but by then Sharer had cooled to Theodore and he lost his chance at the big money. In July 1934, Ann Sharer married Harry Barnes Johansen, a shoe manufacturer from St. Louis. The two eventually divorced in 1953. Theodore Canning disappeared into obscurity and died in 1958 with not so much as an obituary.

Let’s get back to Katrina, this is a story about Katrina. Katrina took back her maiden name as part of the divorce. She never lost her passion for flight and was back in the sky in her own plane. On June 4, 1934 she took part in an air show before 5,000 spectators at the Curtiss-Wright Airport in Baltimore where she came in 3rd place in the light airplane race. She participated in a number of “air carnivals,” as they were known back then, rubbing elbows with many of the early female aviators. She loved flying and was quoted saying, “I would rather be in the air for one hour, than on the ground for one year.” 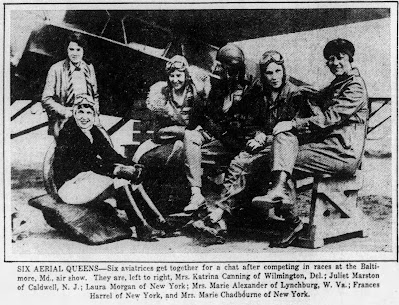 In 1934 she also moved to Cambridge, Maryland and started flying crop inspectors around the Eastern Shore of Maryland for the Phillips Packing Company. Reportedly this was the first service of it’s type. On June 20, 1934 only two weeks into her new job, her plane’s motor shut off and nose dived to the ground from about 50 feet while taking off for a crop inspection. Katrina was taken to Salisbury Hospital where her condition was listed as critical. She suffered from broken ribs, a punctured lung, a fractured knee, and a gashed head. The plane was reportedly tampered with by local youngsters.

Later she said she knew little about when crops were ready to pick, but that day she found out ripe or green, they “squash like the dickens when an Aeronca plows into a field of them and rolls up in a ball.” 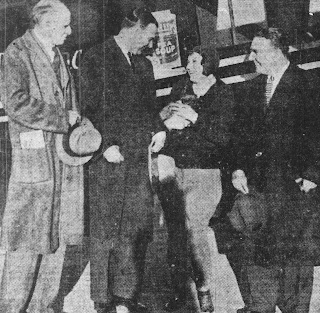 The 29-year-old spent 6 weeks in the hospital but went right back into the cockpit. On December 20, 1934 Col. Albanus Phillips, the wealthy owner of the Phillips Packing Company, sent her on an important mission, a “race with Santa” to deliver an Irish Setter puppy to a friend in Texas. The plane was decorated with the Phillips Packing logo and cans of soup painted on the sides. The event was a spectacle and Katrina was once again in newspapers nationwide.

Katrina took a job as a stenographer but did not give up flying recreationally, she was known locally as the flying stenographer. We know that she kept flying into the 1940s and that she was on the civilian staff at Fort Miles at Cape Henlopen during World War II. After that, she disappeared from the spotlight and lived quietly with her mother in Rehoboth until she passed away at age 60 on May 5, 1965. Her obituary was short and failed to mention her groundbreaking accomplishments. On July 20, 1967 the Wilmington newspapers reported that her mother, Mrs. Clara I. Pusey passed away in Rehoboth at age 86. There were no surviving descendants.

“I would rather be in the air for one hour, than on the ground for one year.” -Katrina Elizabeth Pusey, groundbreaking woman and pioneer in Delaware Aviation History
at November 30, 2020