Tragedy at the Third Street Bridge

Today the Christiana River through Wilmington is a navigable waterway but only sees a tiny fraction of the ship traffic of the its heyday. Drawbridges are still in pace at Market, Walnut, and 4th Streets plus a railroad swing bridge in operation near the Port of Wilmington. These bridges are hardly opened and closed as industrial ship traffic has long disappeared from the Christiana. In the 1880s Wilmington was a different place and the area along the Christiana River was the center of Wilmington's transportation infrastructure. In 1885 the bridge at Third Street swung open and closed approximately 40 times per day to accommodate Wilmington's bustling trade. This many opening must seem amazing to motorists who travel the present-day spans over the Christiana River.

November 6, 1885 started as just another busy day on the river. At about 11:40AM George Harper was crossing the Christiana River at Third Street when a tugboat whistled for the bridge to open. Harper had been standing on the north edge of the bridge watching some workmen installing a telephone wire and didn't notice the tug nor the movement of the bridge which started rotating to swing open for the tug. Harper was struck by a large steel roller that knocked him to the ground and began crushing his body. By the time the bridge tender heard his shrieks and stopped the motion of the bridge the entire lower portion of his body was "flattened to a thickness of two to two and a half inches." 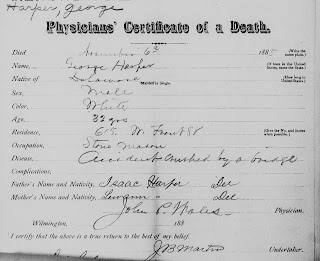 Amazingly, this did not kill him,  two men came to his aid and held hold his limp body as the bridge was backed off of Harper's flattened lower body. After a few minutes Harper regained consciousness and was able to tell the men his name and address. A nearby wagon was used to take Harper to 615 West Front Street where he lived with his brother. Doctor John P. Wales was summoned to tend to him but there was nothing that could be done to help the flattened Harper. Harper was fully conscious and aware through the afternoon but soon began vomiting blood and at 6:30PM he died quietly in his home. He was 32 and single. George Harper was buried at Mt. Salem Cemetery and Almost Forgotten.