In the early 20th century Kiamensi was a small industrial hamlet built around a woolen mill in Mill Creek Hundred. In July of 1907 the folks in the rural village of Kiamensi witnessed the Baltimore & Ohio Railroad carry out one of the greatest feats of engineering ever undertaken in Delaware. A feat that arguably has never been matched.


The Baltimore & Ohio Railroad route between New York and Washington, The Royal Blue Route, was built in the 1880s. By the early 1900s the bridge over the Red Clay Creek at Kiamensi, like all of the original bridges, was becoming obsolete due to the increasing size and weight of the trains. A major bridge building campaign was launched that saw the replacement of all bridges on the route. The iconic arch bridge over the Brandywine at Augustine was built during this time.


Replacing bridges on an operating railroad without interrupting the flow of commerce has always presented major engineering challenges. The bridge over the Brandywine required building a new bridge and rerouting the railroad over a new alignment to connect to the new bridge once it was completed.

For the bridge at Kiamensi the railroad decided on a grand plan of action never before or since attempted on such a scale in Delaware. The existing structure was one of the largest bridges in Delaware at the time. It towered 50 feet over the surface of the Red Clay Creek, was 160 feet long, and weighed 800 tons. The new bridge weighing 1,200 tons was to be built next to the existing bridge on temporary foundations.

The two bridges were to be bolted together, the tracks severed, and slid together as one unit putting the new bridge in the same place as the old one with minimal disruption to the busy railroad. This required not only a temporary foundation for the new bridge but a second temporary foundation for the old bridge to rest on once the move was complete. Work on the new bridge was started by the Youngstown Construction Company in September of 1906. The temporary foundations, called falsework, were built first on the upstream side of the bridge and then construction started. The bridge was built in pieces, delivered in kit form, and assembled by a team of 350 men using wooden derricks and ropes with the muscle provided by a steam donkey. Word got out that Sunday, July 14, 1907 would be the big day. The new bridge was ready on the upstream side and the falsework on the downstream side was ready to receive the old bridge. The two bridges were sitting upon railroad tracks built on the falsework and rollers were in place to guide the bridges down the rails for their short journey.
About 600 men, women, and children gathered near the bridge to see the performance. At 11:45AM what was to be the very last train over the old bridge rolled through Kiamensi. The track workers on both sides of the Red Clay Creek quickly severed the rails.

The boiler and donkey engine started to do their work but nothing happened. The boiler operator stoked the fire with extra wood and tossed in some crude petroleum but the engine just could not get the bridges to move. In a few minutes they quietly announced the shifting of the bridges was postponed. The track workers quickly

reconnected the track and soon trains were running over the old bridge once again.

On Wednesday, July 17, 1907 the construction crew had made the required adjustments, made some repairs to the boiler of the donkey engine, and were ready to try again.

At 11:15AM with a somewhat smaller group of spectators, and a second donkey engine as a backup, the track workers disconnected the rails for the second time. The signal was given and the donkey engine started tugging on the heavy ropes attached to the two bridges. Inch by inch, two bridges slowly started moving.

After about two minutes the donkey engine stopped due to low steam. Worry had to be setting in because the move was not complete. About a minute passed 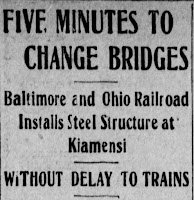 and the engine started working again. The new bridge was in place moments later. The track workers quickly reconnected the rails. The whole operation was completed in five minutes and train traffic was uninterrupted. The old bridge was dismantled, the falseworks removed, and all that remained was new bridge over the Red Clay Creek.


The replacement of the Kiamensi Bridge is still one of the most amazing feats of engineering ever accomplished in Delaware. The engineers who designed the bridge did their job well. Over a century later, the 1907 bridge is still serving the needs of CSX, the current operator of the old B&O Railroad. The next time you’re driving along Kiamensi Road, look upstream as you cross the Red Clay Creek and you'll get a quick glimpse of the Kiamensi railroad bridge.